Potentiometers That Make Sense for Sensing

Abstract: Despite their perceived simplicity, potentiometers can still be an appropriate option in today’s ever-complicated automation industry. Fundamentally a variable resistor, modern potentiometers also offer more traditional outputs such as voltage and current which are common to more expensive sensors. Furthermore, modern potentiometers have been improved to address many of the shortcomings of their predecessors and can offer customization that previously was only offered with more expensive sensors.

Background: Potentiometers are one of the oldest and simplest linear sensor options. Acting as a variable resistor, a voltage differential is applied across a resistor and a wiper slides along it. The ratio of the voltage along the wiper with respect to the voltage supply provides the user with the position of the wiper.

Figure 1: Potentiometers act as a variable resistor, allowing the user to know position based on the ratio of the voltage along the wiper when compared to the supply voltage.

Because of their simplicity and low-cost, linear potentiometers have found their way into countless applications such as:

With such a diverse field of applications, potentiometers can be found in a wide variety of housing options. When selecting a potentiometer, users can choose from stroke length, body style, mounting type, and electrical connection (cable exit or connector) among other things. 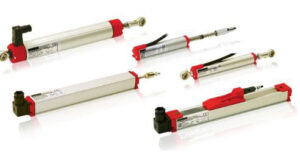 One shortcoming of potentiometers is that since the position is determined based on the ratio of the wiper voltage to the supply voltage, a user must use a regulated linear power supply to provide a constant known voltage or a special ratiometric circuit. In some applications, this may not be an issue, but in others, it may be. As a result, some potentiometers are now available with 0-10V or 4-20mA output configurations. These sensors often have a wide input voltage range which aids in easy integration. One design factor that needs to be kept in mind is overall systems costs, as making a “simple” sensor more complex has the potential to negate the value of a sensor. Potentiometers such as Opkon’s ‘E’ series provide voltage or current outputs at a modest price increase of about 20% when compared to their ratiometric counterparts.

Despite having found their way into many applications, the effectiveness of potentiometers isn’t universal. Since the measurement relies fundamentally on the wiper sliding along the resistive element, wear can cause the wiper to lose contact, thus changing the effective resistance and providing inaccurate readings. In applications with a lot of vibration or ‘dithering’ when a sensor may be relatively stable but moving often along a very short distance, this problem is even more common. For example, consider a float in a liquid level of a tank. Even if the water level is approximately constant, small ripples across the water will cause the float to move up and down. At a hypothetical rate of one cycle per second represents 86,400 cycles per day, so a sensor that is designed to withstand one million cycles may start to show wear issues within a month. Such a short life simply isn’t acceptable in a modern industrial application.

In such applications, customers have three options.

For obvious reasons, the first is least desirable. Replacing a sensor regularly not only creates
costs due to the repeated purchasing of the sensor, but replacing a sensor requires downtime and the cost to pay trained staff to replace and test the sensor. The second option may be an option if the wear is not too severe. High-quality potentiometers feature double-wipers made from gold and palladium to ensure a consistent contact capable of lasting up to 100 million cycles. The use of coatings such as Teflon reduce friction in moving parts and rubber seals at the rod exit protect against dust and splashing water.

In the most demanding cases, alternative technologies should be considered, specifically those that rely on non-contact sensing technologies. Although more expensive, the elimination of the contact wiper and any other reliance on fine moving parts results in a sensor that is immune to the dithering effects in the float example above. In addition, non-contact measuring systems often have higher IP ratings available and better long-term resistance to shock and vibration. The disadvantage of non-contact sensors is price and overall sensor length, as the sensor body if often longer than a comparable potentiometer.

Modern potentiometers offer users a wide variety of linear sensor options. Better materials and design construction create a compelling argument for consideration in the right application. Much of the design customization and housing options found in more expensive technologies can be found in high-quality potentiometers.

Ready to find the right sensor for your application? Everight can help. Fill out the form below to get in touch with one of our experts.