Why Holistic Encoders are More Accurate 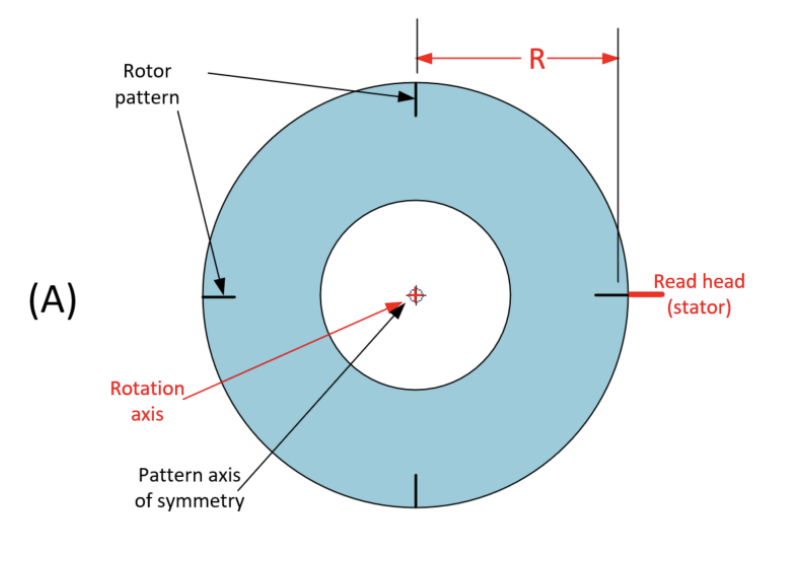 All absolute rotary encoders have a rotor which is attached to the rotating shaft and a stator which is attached to the housing holding the shaft. The interaction of these two components produces a measure of the shafts rotational angle. The most important parameters of absolute rotary sensors are resolution, accuracy and tolerance to misalignment of the rotational axes. Netzer sensors have over a factor of 10 less sensitivity to misalignment than optical or magnetic encoders with similar specifications.

Fig (A) shows schematically an optical or magnetic encoder. The rotor is a disk that contains a pattern of uniformly spaced lines. The read-head (stator) measures the passage of these and converts this information into an angular position.

If the rotational axis and the pattern axis of symmetry are identical then the read head can accurately measure the angle limited only by the resolution of the pattern. If the rotational axes are not aligned, as shown in figure B, then the read head will interpret the misalignment as a rotation error of ΔR/R. In order to reduce the absolute angular error (accuracy) to less 10 millidegrees on a 50mm sensor, the value of ΔR has to be less you than 8.5 µm. This mounting accuracy is impractical and grows worse with smaller encoders. 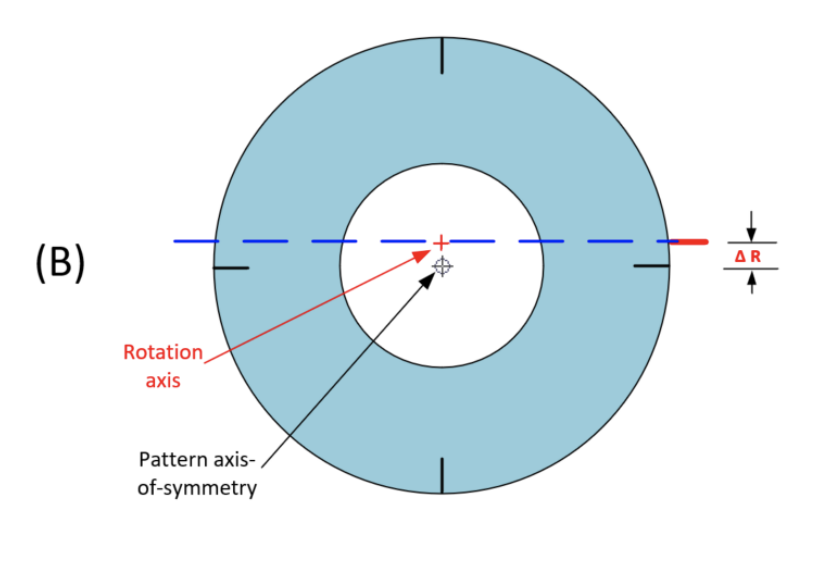 The error can be reduced by placing an additional read head exactly opposite to the original thus producing an equal and opposite error. Averaging the two readings could, in principle, make the encoder insensitive to rotor eccentricity. However, the two read heads must be on the same radius and the angle between them known to a tolerance less than the desired accuracy. These requirements still require mounting tolerances of < 10 µm. In addition, in the case of a rapidly rotating sensor, the timing of the signals from the two must be synchronized. The Netzer Electric Encoder has the equivalent of multiple read-heads accurately distributed around the shaft, hence the term Holistic. Since the location of the virtual read heads are determined by traces laid down on PC boards, positional accuracies in the micron region are easily obtained. There is no need to synchronize signals as there is only one output. Because of these averaging measurements, the DS-58 Netzer encoder can achieve accuracies of less than 10 millidegrees while tolerating rotational misalignments of up to 100 µm.

Interested in Netzer Holistic Encoders? Fill out the form below to discuss their variety of solutions further.